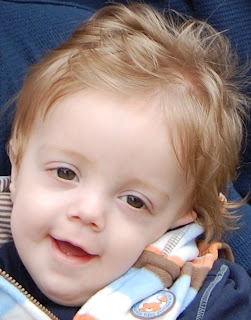 By the time Texas residents Nicole and Bill Morris celebrated the birth of their fourth son, they were no strangers to childhood illnesses. Their careers – Bill as a pediatric nurse and Nicole as a special education teacher – taught them about health issues that affect kids. Things hit home, however, when at 11 days old, their second child tested positive for PKU, a rare genetic disorder that can cause significant mental impairment. Detected early on – as it is in all 50 states as a result of routine newborn screenings – PKU is easily managed allowing PKU babies to grow up healthy.

When the Morrises’ third son was born, PKU was the first thing on their minds. Newborn screenings showed he didn’t share his brother’s issues. “When Greyson came, PKU wasn’t even a concern,” Nicole says.

Greyson tested negative to the PKU screens and was a happy little guy, so all seemed good. Turns out, Greyson’s health wasn’t a matter of black and white, which the Morrises began to realize when he was 4 months old.

“He didn’t have head control,” Nicole remembers, noting the pediatrician wasn’t concerned. Even at his six-month appointment, the doctor didn’t worry. By eight months, however, Greyson started losing his milestones. “He’d say ‘mama’ and ‘dada,’ but he stopped rolling over and he wasn’t sitting up. All of a sudden we noticed he stopped using his left hand,” Nicole recalls.

Concerned, they visited a neurologist who assured them that a child as happy and social as Greyson couldn’t have something seriously wrong. The doctor ordered an MRI that showed no issues, though a nerve biopsy indicated some irregularities. Everyone expected these peculiarities to be a blip on the radar of the boy’s overall health story. Within the month, however, Greyson became fussy and frustrated when he’d never before been a fussy baby before.

He was admitted to the hospital with a failure-to-thrive diagnosis. His neurologist was away and the doctor filling in delivered disconcerting news. “He told us he didn’t know what was wrong with Greyson, but that there was something wrong and that he didn’t think we would be able to fix it,” Nicole says.

On Halloween, Greyson came home. No diagnosis yet, but a clear indication that things were not going to be okay. Nicole and Bill struggled to keep things normal for their other three sons, while worrying about their littlest guy.

“Around Thanksgiving, we got the call from the neurologist,” Nicole remembers. “They still weren’t sure, but they thought he had Krabbe disease.”

Krabbe disease is a rare genetic condition – unrelated to PKU – that affects a body’s ability to produce myelin, which controls the way nerve messages are delivered. It doesn’t affect intelligence the way PKU does, but physical development, including muscle control, vision and hearing, as well as the likelihood of experiencing seizures. While Krabbe disease is not curable, early detection can allow symptoms to be managed, giving affected kids a chance to outlive their two-year life expectancy with a greatly improved quality of life. Like PKU, Krabbe disease is detectable through newborn screenings. PKU is tested for in all 50 states, but few states screen for a vast many other genetic illnesses, including Krabbe.

On Dec. 4, 2008, Nicole and Bill took Greyson for an appointment and the doctor recommended calling in hospice to administer his care. “With his birthday on the 18th and Christmas just after that, we asked if we could wait a few weeks to tell our boys about how serious their brother’s illness was,” Nicole says. “He told us we didn’t have that much time.”

On Dec. 12, 2008, just six days shy of his first birthday, little Greyson slipped peacefully to eternal sleep, leaving his family, doctors and, eventually, the state of Texas to ask how this little boy’s condition – one that easily can be detected through a newborn screening – could have taken his life, and the lives of others like him, so soon.

The answer to that question is still being written. The Morrises have worked tirelessly to have screenings for Krabbe disease and a host of other genetic disorders added to the panel administered to babies born in Texas. They’re raising awareness and providing support to families of Krabbe children, and are planning their first major event – a 5K race to be held in October this year.

Visit the Morrises’ website to learn more about their family and their efforts. www.greysgift.org.