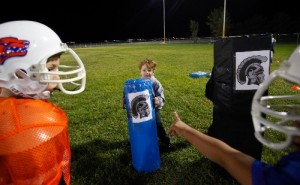 It was quite the sight for Amanda Cardiff as she watched her 5-year-old son spike the ball after his first touchdown, something she never thought she’d see because of his rare blood disorder.

Despite Drew Douglas-Cardiff’s love for sports, his recent diagnosis of Von Willebrand disease prevents him from partaking in most activities, which made the touchdown all the more memorable.

Drew has been playing for the Tiny Mite Wolves, a Pop Warner football team, since August. He earned the nickname “Little Giant” because, despite being one of the youngest players – the team is composed of 5- to 7-year-olds – and possibly the smallest player, he never let any obstacle get in his way.

While playing, Drew kept having chronic nose bleeds. After 17 nose bleeds in one day, Cardiff, a Henderson resident, took him to a hospital emergency room.

“It affects 1 to 2 percent of the population,” Cardiff said.

Of the six types of Von Willebrand disease, Cardiff said, Drew had type 2N, the rarest within that type. The disease means Drew can never play most sports because of the high risk of internal bleeding.

“He can pretty much play golf,” Cardiff said. “No bowling, no baseball, no basketball.”

Ever since Drew could walk, he would chase after or throw a ball around. He was made for sports.

“The other day he said he wanted to be a quarterback for the Cowboys,” Cardiff said.

The news was devastating for Cardiff and Drew, who still can’t comprehend why he can’t play.

“He thinks he is letting his team down,” Cardiff said. “It’s hard to keep it together when he is crying.”

Cardiff could barely muster the words to tell the coaches that her son couldn’t play.

“I figured they would just tell me to hand over his jersey and that would be it,” Cardiff said. “They have only known him two months.”

But to Cardiff’s surprise, that wasn’t it for Drew.

“The biggest thing I emphasize is this is a family,” said Victor Montecerin, coach of the Tiny Mite Wolves and a Henderson resident. “I had an example to set.”

Montecerin, along with coaches Anthony Dalrymple, Josh Miller, Nathan Vargas and Robert Marquis, rallied to make sure Drew was still part of the team.

“We are always looking for people who want to work with children and provide a good learning environment,” Montecerin said. “We serve as a model. We are not just out to teach about sportsmanship and how to be good children.”

On a brisk autumn night, Drew is next to Montecerin and the other coaches during practice with his whistle and play book. He remains a part of the team.

“He leads the stretches for the team,” Montecerin said. “He even weighs in with the team before the games even though he doesn’t play.”

The team didn’t want Drew just to feel included. It decided it wanted to see his dream of scoring a touchdown come true.

At the team’s Oct. 13 game in Pahrump, the coaches arranged for a little surprise in which Drew could score for the Wolves.

“(Montecerin) came to me and asked if it was OK,” Cardiff said. “It is amazing because no one had to say yes. No one had to do this for Drew.”

Montecerin, along with the coaches from the opposing team, made sure none of the children touched Drew as they chased him to the end zone.

“I have been a paramedic for 13 years and have seen some great things,” Montecerin said. “That was the best.”

Cardiff said there wasn’t a dry eye on the field. Drew is still ecstatic about the touchdown.

“He talked about it the entire way home. He still brings it up sometimes,” Cardiff said. “This is a memory he will hold on to.”