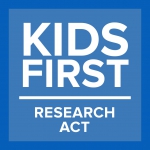 H.R. 2019, also known as the Kids First Research Act of 2013, was introduced to the House of Representatives on May 16, 2013 by Congressman Gregg Harper (R-MS-3).  This bill would divert taxpayer financing of presidential campaigns to a new 10-year pediatric research fund administered by the National Institutes of Health (NIH).

We all have seen that little checkbox on our 1040 tax forms inviting us to contribute $3 to the presidential campaign fund.  Funds collected from this process are currently used to provide funds for presidential candidates and party conventions who request matching contributions.  Under this new legislation, this checkbox will be eliminated from IRS forms and the funds that would have gone towards funding politics would now be used to conduct research and help find cures for pediatric genetic diseases and conditions, such as autism, cancer and rare diseases and disorders which have no cures.

The great thing about this legislation is that the new pediatric research fund would be fully paid for with the resources that would have gone towards lavish political conventions or help presidential candidates from either party create negative attack ads during the political season.  The NIH already struggles to utilize the funding it currently has to conduct and fund research to help children suffering from life-limiting and debilitating genetic diseases.  This new fund will allow further research to be conducted in search for cures.

This bill has just been introduced to Congress in April and it has the support of the Majority Leader, Eric Cantor (R-VA-7), along with 106 other House members.  Only 6 are Democrats which is a little disconcerting as this bill is bi-partisan in nature and would help children across the spectrum.  This only emphasizes the need to eliminate public funding of politics and to turn our attention to children in need.

I highly recommend anyone interested in learning more about the bill or of its progress in Congress to track the bill through govtrack.us (http://www.govtrack.us/congress/bills/113/hr2019).

I also recommend everyone to contact their member of Congress to urge them to support this legislation and help pass the bill.