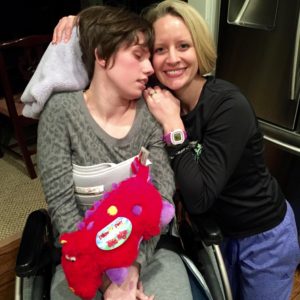 CHARLOTTE, N.C. – Taylor King, 18, ran two 5K races after losing her vision to a rare, fatal condition called infantile Batten disease. Now her older sister, Laura King Edwards, is running in all 50 states to honor her and support one in 10 Americans fighting a rare disease. Edwards will run the first leg of Calico Racing’s three-day Rally in the Valley running festival on March 31, marking state number 16 in her quest for 50.

“After her diagnosis, Taylor could have quit, but giving up was never in her DNA,” said Edwards, 35. “The image of my sister finishing her first 5K despite being blind and fighting Batten disease will be with me forever. She inspires me in all that I do.”

In Nevada, Edwards will also run for the late Hannah Ostrea, who lost her battle with Gaucher Disease type 2/3 in 2011. Hannah’s parents, Carrie and Robert Ostrea, founded Henderson’s Little Miss Hannah Foundation shortly after Hannah’s death. Though answers didn’t come in time to save Hannah, today the people who love her work to ensure other Southern Nevada families battling rare and complex diseases have access to crucial medical equipment and support services.

“We couldn’t save our daughter, but the tireless efforts of our team and others, like Taylor’s Tale, are bringing new hope to suffering children and their families,” Carrie said. We’ll never forget our youngest daughter’s beautiful spirit, and we’ll always work to support her legacy by doing all we can to help others like her.” 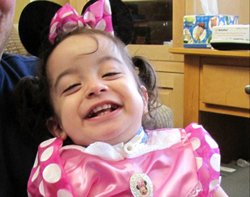 Like the Ostreas, Edwards and her family founded a charity, Taylor’s Tale, to help build a better future for children with Batten disease and others fighting rare diseases. As leaders within the rare disease community, Taylor’s Tale and the Little Miss Hannah Foundation are moving mountains not just in their hometowns, but across the United States and worldwide.

According to the National Institutes of Health, approximately one in 10 Americans (about 25 million people in the U.S.) has a rare disease. In the U.S., a condition is considered rare if it affects fewer than 200,000 persons combined in a particular rare disease group.

“Rare disease impacts more people than HIV and cancer combined,” Edwards said. “People like Taylor and Hannah are an inspiration, and their courage serves as a reminder that while a disease may be rare, hope should not be.”