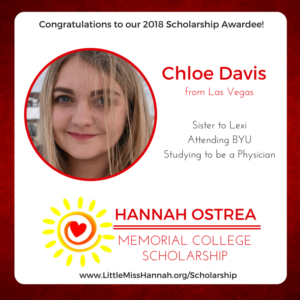 When my sister was 7 years old, she sat down one day and wrote a list she called “48 Ways to serve people, friends, and family”. This list included acts of service that Lexi saw as important to her life and to the lives of those closest to her. Lexi was always wonderful at looking out for the needs of others.

When she passed away, I didn’t know where I belonged in the Spina bifida community. It wasn’t typical for someone with Spina bifida to pass away as young as Lexi did. For a time, I felt like an outsider in this community that I had been a part of for so long. I felt like I needed to do something profound for people who had the condition, but at the same time felt torn because it was hard to be around people who were like Lexi while her loss was so prevalent on my mind. Throughout high school, I volunteered for the local Walk-N-Roll for Spina bifida, but it felt like I wasn’t really doing all that I could for myself, and for people with disabilities. When I came to college, I realized something that has since been incredibly profound in my life. As I was reading Lexi’s list of ways to serve others, I recognized two things that made my efforts to raise awareness promote understanding so much more meaningful to me.

First, nothing on Lexi’s list was incredibly earth shaking or world changing. Most of the opportunities Lexi recognized as service were small and simple. She suggested little things like letting her friends choose what game they got to play that day, or helping to clean the house. I realized that I didn’t need to be changing the entire world to affectively help create awareness and understanding for Lexi’s rare disease, or for individual’s with rare diseases in general, and I began to understand just how effective the little things can be. As I’ve volunteered at the children’s hospital and as a camp counselor for children with special needs, I have been able to witness changes in individuals that I have been able to take part in bringing about. It has been inspiring to see how easy it has been to create an atmosphere of empowerment and understanding as I’ve helped children realize the incredible potential they have.

l have learned, as I think Lexi had always known, that you might not be able to change the world, but that it’s easier than you think to change one person’s world. Second, through Lexi’s writing, I observed that she didn’t let her own limitations stop her f om reaching outside of herself. My favorite item on the list was when Lexi said ·’I can help somebody that can’t hear or see to get them somewhere that they need to go”. Lexi couldn’t walk, often was really sick, and had a multitude of other reasons she could have given for having someone else help the person who couldn’t see or hear to get somewhere. The amazing thing is that Lexi didn’t let those problems define her or her ability to do good. Often times, I have found myself making excuses for why I can’t do something. It is really difficult to create awareness and understanding when I am thinking with that mindset.

Today, when I don’t want to go and work in the research lab because I am tired, or I don’t want to volunteer at the hospital because it reminds me too much of Lexi, I remember that I too can reach beyond my own limitations to do a little bit of good for somebody else.

I’ve tried to utilize these principles in my efforts to create awareness and understanding for not only Lexi’s rare disease, but for all people who have rare diseases. It has been incredible to be able to see the small, but important differences I have been able to make in the lives of the children that I volunteer with, in the research labs that I am apart of on my college campus, and in my interactions in general with other people. I am a better and more involved person because of Lexi’s example of looking past limitations and doing small and simple things to improve the lives of others.