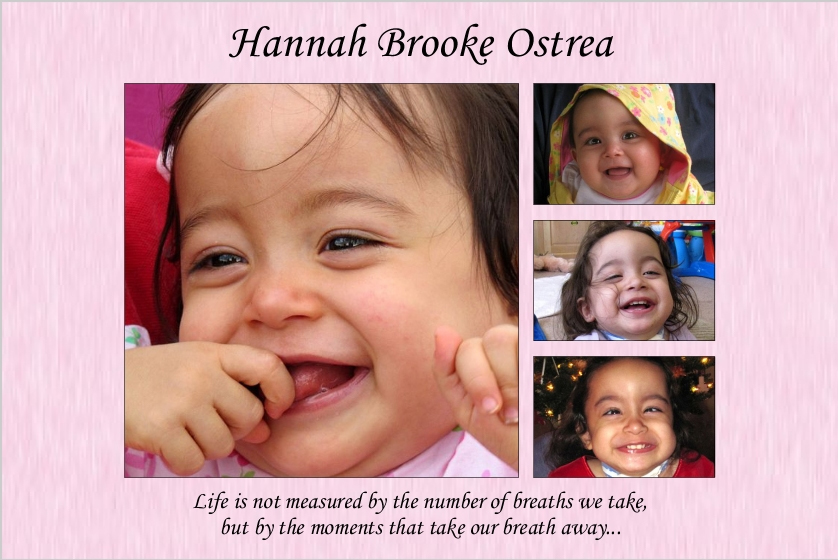 Our Little Miss Hannah was born on July 25, 2008. She was 6 pounds 11 ounces and 19 inches long and looked perfect in every way.  Two days after birth, an enlarged spleen and extremely low platelets raised the first hint that our perfect baby had some differences. She was admitted to the NICU for two weeks while medical experts tried to find an explanation for her symptoms. Once the easy diagnoses were ruled out, her daddy and I knew that we were going to fight to get her the best care.

At 5 months old, her liver became involved, and she was diagnosed with Neuronopathic Gaucher’s Disease type 2 or type 3, an incredibly rare and life-limiting genetic metabolic disorder.

Her doctors originally gave us a prognosis of 9 months. Nine months. The race was on to save Hannah’s life.

We searched out every researcher, specialist and scientist who was an expert in Gaucher’s Disease and its related family of diseases. We realized that there was very little work being done to find a true understanding of how Gaucher’s destroys the brain, but those few who were dedicated to this search were very inadequately funded. We sent our baby girl’s cells to researchers in Canada, the U.S. and Israel in hopes of that something new and experimental could prolong her life and give us time.

Nothing substantial was found in her short life.

Despite the cruel progression of this disease, Hannah was an incredibly happy and charming little girl. Even though the neurologic progression had already started, she was able to cruise, crawl, play with toddler toys, and chase her older brother and sister around in her walker when she was around 20 months old. She could drink and eat pureed foods by mouth, and she just loved her refried beans and cheese!

She was hospitalized for seven weeks in the summer of 2010, initially for a seizure and subsequent pneumonia, from which she never fully recovered. It is unknown whether she suffered a stroke, had a catastrophic seizure, or was overmedicated in the hospital when intubated, but her condition significantly worsened. She had developed an intense movement disorder, was no longer able to feed by mouth, and she ended up needing a tracheostomy to breathe and a gastric tube to be fed.

But that didn’t stop her from playing, being cuddled and smiling. Even though her gross and fine motor skills continued to deteriorate, she could still listen and watch her favorite shows – The Wiggles, Mickey Mouse Clubhouse and Elmo. Oh, and we can’t forget her obsession with hearing Glee’s version of Ice, Ice, Baby and Beyonce’s Single Ladies songs! Her taste in music was very eclectic.

Over her three years, Hannah was in enrolled in various therapy programs. Before her hospitalization in 2010, she took physical therapy, occupational therapy, vision therapy, developmental therapy and her absolute favorite, hydrotherapy. She was not a fan of any of the therapies except water therapy, and we were so sad to have lost that when she got her tracheostomy. But even after her illness, she continued with her therapies, trying to get ahead of the skills that her Gaucher’s Disease was slowly destroying.

Hannah was such a charmer. Whether a doctor, therapist or someone passing by on the street, she had a way of hooking their hearts. Even though she only progressed to a 12+ month old developmental level, she sure knew how to “work it” to get what she wanted. It was easy to fall in love with the sweetheart of a girl with the big cheeks, curly brown hair and a heart as big as the sun.

But don’t mess with her technology! Good friends purchased an iPad for her in late 2010, and she used it every day. Whether she was watching her favorite Wiggles or Mickey Mouse videos or practicing on the many special needs apps available, she got so much benefit from it. When her brother “borrowed” the iPad one afternoon, she rolled over to him and grabbed it away, a spot-on little sister stunt.

Late summer of 2011, we noticed more significant changes in Hannah’s condition. We could see the progression was worsening to the point where she barely could roll over to move, was unable to sit unassisted, and could not pick up objects in her hand. Looking back, we were naive about how serious this progression was, but the signs were there. She had fewer smiles. It was harder for her to sleep or even get comfortable.

She was hospitalized for more than a month on three separate occasions from late September to mid October. Despite all efforts, we could not make her comfortable or happy. She just always seemed unhappy and irritated.  Shortly, a brain MRI revealed the cause: “Tremendous” brain matter loss caused by her disease.

After consultations with our specialists, Hannah was deemed “end stage.” This irritability we were seeing was caused by the progressive brainstem dysfunction of her disease.  We were given some “hail Mary” options such as brain drilling and a medically-induced coma, but her daddy and I knew we didn’t want to put her through that.

We knew that Hannah was done fighting. The Gaucher’s Disease destroyed her brain and body to the point where she simply couldn’t function anymore. What clinched it for us was that she was so uncomfortable, we were rarely got smiles from her.  Even cuddling, her all-time favorite thing to do, was of no comfort anymore.

Her daddy and I decided that it was time to bring Hannah home. We wanted her to be at home when she passed away, surrounded by me and her daddy, her brother and sister, and all of the family and good friends who made her life so full.  Her daddy and I spent that morning in the hospital room, sitting on the couch next to Hannah’s bed, in tears as we made that decision.

We were going to bring our baby girl home to die.

We met with Nathan Adelson Hospice (NAH), the only pediatric hospice in Nevada. Once we made the decision to bring her home, they took care of every single thing from the medical support to counselors for the kids. Hannah and I spent the first few days at their facility in order to prepare. NAH was able to get Hannah more comfortable (in other words, safely sedated 24/7).  They helped us to get the house ready, and most importantly, they helped us prepare the kids to understand that their little sister was dying.

Although completely sedated around the clock, Hannah continued with us for seven weeks at home.  She made it through all our birthdays and Thanksgiving. She passed away late Sunday night, December 4, 2011. That entire weekend, she was cuddled, loved and surrounded by her entire family and close friends. Then Sunday night, after she got her snuggles and love from everyone, she was last held by me, her mommy.  She passed away in my arms.

She was 3 years old.   To read my eulogy to Hannah, my promise to her, please click here.

You can read about Hannah’s life journey at http://www.littlemisshannah.com. 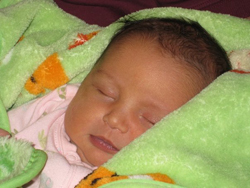 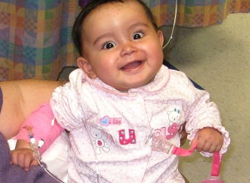 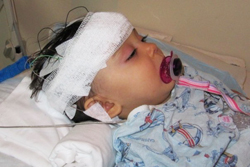 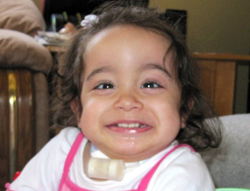 Can you tell Minnie is her favorite?
26 months 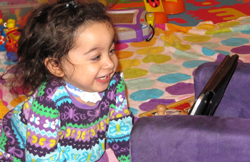 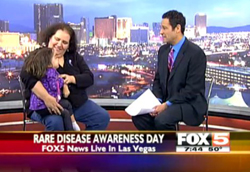 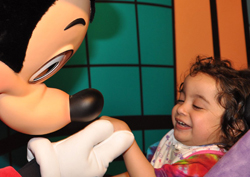 Make-a-Wish trip to Disney World!
34 months - 6 months before she passed away