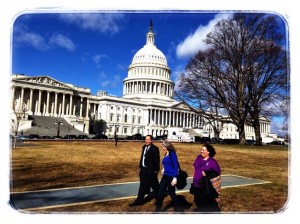 On Tuesday, February 27, 2013, our Little Miss Hannah Foundation joined a group of 150 patient and parent advocates of rare disease awareness marched on Capitol Hill to meet with legislators.

The event was organized by the Rare Disease Legislative Advocates and meetings with representatives from 45 states were arranged.  Our first goal was to make our legislators aware of the Congressional Rare Disease Caucus and to ask them to join and support their efforts.  A second goal was to voice our concerns about the upcoming Sequestration and how crucial programs from the NIH and the FDA could be affected by across-the-board cuts in our government. 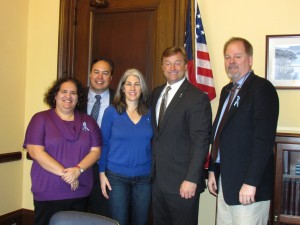 Senator Dean Heller and the Ostrea and Hempel families

Our first meeting was held in the Russell Senate Building with Senator Dean Heller’s office.  Senator Heller and his Legislative Aid, Hayley Douglas, were very amenable to our cause.

He has a nephew who suffers from Aspergers and spoke about the frustration his family felt as they were trying to get a diagnosis.  He certainly understood our concerns and assured us that he would work very hard with other members of Congress to solve the Sequestration process, although admitting that it will likely go into effect this Friday.

We provided the Senator with a Rare Disease Awareness lapel pin and he was happy to put it on and wear it in honor of World Rare Disease Day!  We had our pictures taken and made arrangements to follow up with the Senator in his district offices in the near future.  To our delight, the Senator tweeted the picture taken with all of us to his followers and reiterated his support!

We next headed to meet with our group in the Rayburn House Building, located on the opposite side of the Capitol.  It was definitely a very cold day, but we were grateful that the rains that were expected did not show up.  We met up with our fellow advocates in the Rayburn Cafeteria to grab a bite and to describe experiences so far.

From Rayburn, our next meeting was with my Congressman Joe Heck in the Cannon House Building.  Fortunately, there is a complex underground tunnel system in the Capitol, allowing members and visitors to visit each building without leaving and going through security at each point.  The Cannon building is located two buildings over and the walk is not a short one.

Upon arrival at his office, we were greeted by his Legislative Assistant, Ryan McBride, who informed us that the Congressman was in a Committee Meeting and would step out to meet with us.  The Committee was being held back in the Rayburn Building, so off we went back to where we started!

Upon arriving at the Committee Room, we were funneled into a side room and the Congressman came in to meet with us.  I had met the Congressman a few times in the past in our District, so it was nice to see him in D.C.  The Congressman is also a physician and has specific knowledge and interest in the health issues related to rare diseases.

He definitely had a lot on his mind as he was in the middle of a committee meeting and we overheard that he had another meeting with a Senator right after ours.  We definitely appreciated his willingness to make time to meet with us as he could have easily had his aide take the meeting for him as he was clearly very busy.  I will be following up with his local office to schedule a more comfortable meeting to discuss further.

Our third meeting was scheduled with Congressman Mark Amodei, who is the representative for Northern Nevada. Unfortunately, Congressman Amodei was on the floor of the House participating in a vote and was not able to attend the meeting. We sat with his Legislative Counsel, Anna Lake, who took a lot of notes and helped the Hempel family connect with the congressman’s scheduler in the district for a follow up meeting.

Our last and final meeting was with Senator Harry Reid’s office. We met with his Senior Policy Advisor, Carolyn Gluck, who was genuinely interested in our personal stories and provided us with the contact information for the district offices.

She informed us that Senator Reid does not join caucuses due to his leadership status. When we spoke about our concerns with Sequestration, she provided us with a few talking points and indicated that the Senator is waiting for the Republicans to get their acts together to solve the problem.  I was a little disappointed to hear partisan excuses for what’s going on in Washington this week as it doesn’t really matter to me what party or political leaning a government official who is supposed to represent me has. As Majority Leader in the Senate, I expect Senator Reid to provide the leadership he yields to solve the problems facing his constituents as well as the country. I will definitely be following up with his local office to develop a relationship with his staff as it appears that there will be very few opportunities, if any, to meet with the Senator in person given his stature.

Overall, I am very happy with the meetings we had with our legislators and their staff. It was fantastic to see a large group of advocates, representing hundreds of diseases and causes, join together as one to raise awareness and to show Congress that we are a group to be reckoned with!