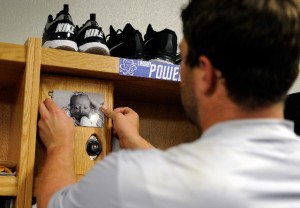 51s catcher Landon Powell posts a photograph of his infant daughter Izzy on his locker in the Cashman Field clubhouse.

Coming off knee surgery in 2009, 51s catcher Landon Powell was working out when he collapsed and went into convulsions. Rushed to a hospital, Powell was diagnosed with autoimmune hepatitis, a rare disease that might eventually require him to undergo a life-saving liver transplant.

Despite having to take medication that caused performance-sapping side effects, Powell persevered and soon made his major league debut for the Oakland Athletics, drilling a two-run double off Seattle Mariners ace Felix Hernandez in his first at-bat.

“It was all downhill after that,” the 31-year-old Powell said facetiously, but only somewhat.

Though the former first-round draft pick went on to catch Dallas Braden’s 2010 perfect game for Oakland — one of 23 in big league history — and was a Pacific Coast League All-Star last year with Oklahoma City, the joy of his feats on the field has been dimmed by personal sadness.

On Jan. 25, Powell’s infant daughter Izzy, one of twins, died at 4½ months old of HLH (hemophagocytic lymphohistiocytosis), a rare disease that afflicts about one in a million Americans.

Izzy Powell, who never left the hospital after being born prematurely Sept. 10, underwent more than 70 transfusions, 14 surgeries, eight weeks of chemotherapy, four spinal taps and three biopsies as she battled the immune disorder that aggressively attacked her sick and healthy cells alike.

Izzy, whose twin sister, Ellie, is healthy, inspired many people during her short life, garnering nearly 40,000 likes on a “Prayers for Izzy” Facebook page.

“She fought hard, and she motivated a lot of people with how strong she was,” said Powell, who also has a 3-year-old son, Holden, with his wife, Ally. “I’m grateful we had her for the time we did, and I’m glad she’s not hurting anymore and she’s in a better place.

“She was a blessing in the time we had her. She was a miracle in a lot of ways. For me, she strengthened my faith and gave me a lot stronger purpose in life. I know I’ll get to see her again in heaven.”

Powell believes Izzy was a miracle baby from the beginning, mainly because the odds were against the couple having more children because of the medication he takes for his own condition. But after two years of trying with fertility treatments, Ally became pregnant again.

“It was a really happy time for us,” Powell said.

Curiously, during Ally’s first ultrasound, doctors saw only one embryo, and during her second, when she was eight weeks pregnant, doctors heard one heartbeat. There was a second fetal sac, but the Powells were told it was empty — a fairly common occurrence known as “vanishing twin syndrome,” in which one of a set of twin fetuses disappears in the uterus during pregnancy.

But when the Powells returned for a 12th-week ultrasound, they and the doctors were stunned by what they saw.

“Sure enough, there was another baby that showed up,” Powell said. “The doctors couldn’t understand it. They didn’t know how Izzy could’ve been there. They were just as amazed as we were.”

Born six weeks early, the sisters stayed in the neonatal intensive care unit for a couple of weeks. Ellie’s condition quickly improved and the couple was able to take her home, but Izzy’s did not, starting a long painful process for her and her parents.

People of strong faith, Landon and Ally Powell have relied on it to help them deal with the tragedy.

“I don’t think I’d be able to function on a daily basis if not (for my faith),” said Powell, who believes Izzy’s struggle was not in vain.

“For me, her purpose was divine,” he said. “My belief is that God put her on earth for a reason. He gave her to my wife and I so we could share our story and hopefully touch people’s lives. To let other people believe what it is to have faith and show how strong she was and how strong we can be in this tragedy, with God to lean on and help you through tough times.

“We prayed that she’d be healed and she is, just not the way we thought she would be. She’s not hurting anymore.”

Inspired by Powell’s own autoimmune illness, in 2010 he and Ally started a “Donors on the Diamond” charity in South Carolina, where they live, and have raised funds and awareness for the cause.

“This was a cause close to our hearts,” said Powell, whose charity benefits Donate Life, whose Nevada chapter is sponsoring tonight’s game at Cashman Field.

Nearly 120,000 people in the U.S. are awaiting life-saving transplants, and 18 Americans die every day before having received a transplant.

Nevada ranks 39th in the nation for organ donations.

“One person’s organs can save up to eight lives,” Powell said. “What better way to leave this world than to be a hero by being an organ donor.”

Reposted from the Review Journal.