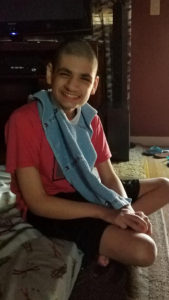 Brian Salvador Garcia was born August 20th, 2001. At the age of 3 months he had his first seizure and his fight began from there. As he got older, he was diagnosed with Lennox Gastaut Syndrome. With time, we as parents constantly traveled with Brian in search of treatments to better his seizure disorder. From UCLA to CHOC, we did it all.

Brian was known as a water baby. Anything and everything to do with the water was his favorite. It was always pool season for Brian.

For his Make-A-Wish, he went swimming with the dolphins in Miami. Brian also had a way of making all the ladies fall in love. Whether it was his hypnotizing stare or his gorgeous smile, he was quite the ladies man. For several months his health was at it’s best. He would go days with low seizure activity. His energy was at it’s highest. He was starting to say mum (mom) and was taking drinks by mouth again.

Within days, his health unfortunately took a turn for the worst. His LGS caused an excessive amount of increase in his seizure activity. Leading to immobility in his stomach causing him to have to get a Broviac line. He was constantly in and out of various hospital in the time period of 2 months.

On February 25th, 2017 LGS claimed our special baby. Brian had an impact on many people’s life besides his family’s. He will always be loved and remembered dearly.