One of the more popular provisions of the Affordable Care Act (ACA) prohibits insurance companies from excluding coverage for individuals with pre-existing conditions.

For families with children suffering from extensive medical conditions due to rare disease, this is a welcomed feature of the new health care legislation.   Parents who were in between jobs without coverage were exposed to the possibility that their medically-fragile child would be excluded from coverage provided by their next employer as most insurance companies would not provide benefits for individuals with conditions they developed prior to joining the plan.

I was fortunate to have had employment with health insurance when my daughter, Hannah, was born in 2008.  Shortly after her birth, she experienced a multitude of complications ranging from low platelet counts, calling for multiple IVIg infusions; a large spleen and liver, necessitating a multitude of tests, ultrasounds and x-rays; and a discovery of her diagnosis (Neuronopathic  Gaucher’s Disease Type 2/3) which required many consultations with specialists. 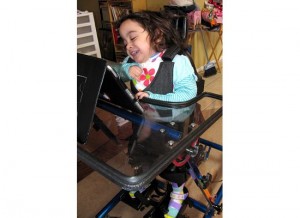 Throughout my daughter’s life, she incurred over $1 million of medical expenses, most of which was covered by my primary insurance offered through my employment.   I was lucky to have had continuous coverage throughout Hannah’s life.  One of things that always worried me was my employment status.  I wasn’t particularly happy in my job at the time, but making a change was not an option as I was terrified that Hannah’s medical care would be interrupted.

In early 2010, my fears became a reality when I lost my job.  Luckily, I was able to take advantage of COBRA for the seven months I was unemployed.  COBRA provided a seamless continuation of my coverage and I saw no difference in how Hannah’s medical care was treated.  When I found my current position, my new insurance company continued her care until her passing in December 2011.  COBRA was extremely expensive and paying for this coverage took a toll on our family savings, but it had to be done in order to preserve Hannah’s continued medical care.

While this is great for the family, insurance companies will be forced to pass along the additional costs of coverage to the physician or health care facility.  This may lead to many doctors deciding not to participate in certain private plans, forcing patients to change their doctors and/or their insurance to the mandated government plan that everyone without private insurance must participate in.   This should concern every parent of a medically-fragile child.

Eliminating pre-existing condition clauses is definitely needed; however, the medical coverage received should be maintained.   I’m not so sure that this will happen under the current health care law.

Parents with children with rare diseases, special needs and/or medically-fragile conditions should pay attention to how the new legislation will begin to roll out.  We’re in an election year and changes to the health care law are inevitable, regardless of the outcome.  It is our responsibility as parents to become more involved in the process.