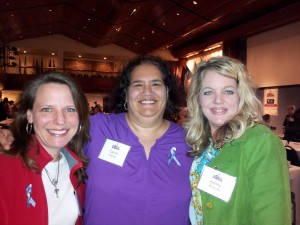 The Rare Disease Legislative Advocates (RDLA) organized a fantastic conference today, held at the historic National Press Club in Washington, D.C., designed to empower patient and parent advocates to be more active in the legislative process.

Presentations by successful advocates such as Anthony Castaldo from the U.S. Hereditary Angioedema Advocates, Emil Kakkis from the Everylife Foundation for Rare Diseases, and Nancy Goodman from Kids v Cancer provided both inspiration and insight to those of us planning a trip to the Hill on Wednesday to speak with our representatives on the importance of rare disease research funding.

We were also given some tips on how to be efficient and effective with our Congressional representatives by staffers from Reps. Butterfield (D-NC), Burgess (R-TX), Lance (R-NJ) and Crowley (D-NY).  It was particularly useful to learn how our email and written correspondence are handled as they are received and how to best to get a member’s attention!

The second half of the day’s agenda involved an in depth discussion on the impending Sequestration and the potential effects to agencies involved with health care research and administration such as the National Institutes of Health (NIH) and the Food and Drug Administration (FDA).  Additional discussion led by Joel White from the Council for Affordable Health Coverage surrounding the Affordable Care Act and the provisions for a revised Insurance Exchange System for those currently uninsured resulted in numerous questions and comments from the audience and prompted the organizers to announce a webinar devoted to the subject in the coming months.

It is clear that the changes involving health care reform are still widely misunderstood and there are opportunities for us as advocates to influence future legislation to ensure that families dealing with rare disease have their issues and concerns known.

This is the advocacy process and why most of us are here in Washington, D.C. this week.  With the help of Soapbox Consulting, a consulting firm specializing in assisting and training non-profit groups on how to effectively lobby Congress, we were provided with scheduled meetings with each of our members of Congress and/or their legislative staff for Wednesday’s Lobby Day.