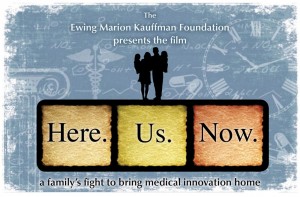 Monday night’s screening of Here.Us.Now., hosted by the Rare Disease Legislative Associates, launched a weeklong schedule of events in Washington, D.C. for rare disease advocates to raise awareness of the importance of rare disease research.

The documentary features a Northern Nevada couple raising twin daughters afflicted with the rare Niemann-Pick C disease.  Hugh and Chris Hempel are pioneers in the world of parent advocacy, not only taking matters into their own hands by contacting physicians, laboratories and government officials around the world in search for an effective treatment and, ultimately, a cure for this horrible disease, but they have also gone the additional step of creating their own biotech company with this goal in mind.

The film was shown to an audience of around 250 parent and patient advocates and ended with a panel discussion including Hugh Hempel and officials from the NIH and other advocacy organizations.  The film highlighted the problems facing the rare disease community from the lack of funding to the impressions that many in power have that private industry is taking care of finding treatments and cures for rare disease patients.

This event brought together advocates who are working within their own rare disease communities and highlighted the importance of coming together as a group to create a much more powerful force as we head to Capitol Hill this week.