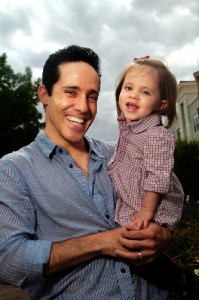 In “Jersey Boys,” Jeff Leibow shows his strength of voice several nights a week. Offstage, he’s showing his inner strength in the fight against the disorder that has affected his daughter.

Leibow, who portrays Nick Massi in the Paris Las Vegas production, remains resolute in the fight against Neurofibromatosis, the disease from which his 3 ½-year-old daughter, Emma, suffers. The condition is mostly a mystery to those who suffer from NF and members of the health-care community, a genetic disorder that attacks the central nervous system and disables the body’s tumor suppressor gene. Without warning, tumors can surface and grow on any nerve in the body.

To raise funding to battle NF, Leibow visited Washington, D.C., in February to speak with representatives of every member of Nevada’s congressional delegation. Federal assistance in the fight against NF is provided through Congressionally Directed Medical Research Programs, a Department of Defense initiative established in 1996 to appropriate public funding to support programs battling myriad diseases and disorders. The CDMRP is the only federally backed program fighting NF, and Leibow is garnering support through an online letter-writing campaign to persuade lawmakers to authorize funding for research into treatment for NF.

The link to lend support through the online campaign is the NF official website. Just follow the prompts to sign an online petition urging one of Nevada’s elected officials serving in the House of Representatives (Reps. Dina Titus, Mark Amodei, Joe Heck and Steven Horsford) to support the authorization of federal funding to help fight NF. The deadline for contacting the representative in your district is Friday. Leibow hopes a push from Nevada’s constituents will persuade lawmakers to release money to fight the disorder.

Leibow has organized two benefit shows over the past two years to raise money in the battle against NF, most recently organizing the “NF Hope Concert” at Harrah’s in October. The condition is insidious, as tumors, typically benign, surface anywhere in the body seemingly at random. Just this January, physicians found a benign tumor in Emma’s brain during a routine neurological exam.
“Fortunately for us, and for her, she would not know anything is wrong,” Leibow says. “She is a pretty typical 3 ½-year-old little girl who doesn’t live with a care. She has a spirit that must be innate in kids who have to deal with this.”

Reposted from the Las Vegas Sun.